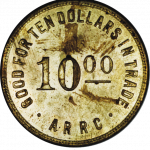 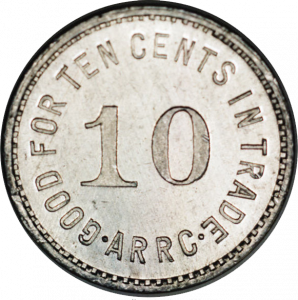 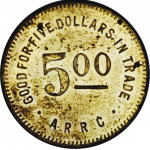 The Matanuska Colony was a unique experiment in the wilderness, occurring at an unusual time in history. Many social and economic ideas have been tested in Palmer, both during the official years of the Matanuska Colony and since, but bingles have proven one of the most interesting.

These coins are believed to be the only Federally authorized token money ever produced. They were intended to insulate the hemorrhaging economy of the new colony, and make things easier on pioneers who were struggling to take root under difficult circumstances. Ultimately, their success was only partial, but the story is a fascinating one.

Like other projects of the New Deal, the Matanuska Colony was designed to benefit several different groups of people struggling through the Great Depression. Workers who helped to build the physical infrastructure of the colony received meaningful employment during hard economic times. The territory of Alaska gained more than 1,500 new residents, all productive, hard-working families who would increase the are’s economic output, support the railroad with their business and, hopefully, cultivate a positive long-term interest in the development of the territory.

The colonists themselves got a helping hand to make the new start that would allow them to support their growing families. Each family was issued a 3,000-dollar, 30-year no-interest loan with which to begin their farm. All business, from the buying of goods to the selling of farm produce, was to be conducted as a cooperative venture through the Alaska Rural Rehabilitation Corporation [ARRC], the Federal organization that oversaw the colony.

The reasons for this arrangement were excellent. First, cash-poor colonists could provision themselves on credit at the ARRC Trading Post, thereby feeding their families through the first year as they cleared land and built houses. Second, the ARRC cooperative was able to facilitate the sale of large volumes of produce to markets that individual homesteaders had difficulty reaching. Also, rather than competing against each other, colonists would work together to help the community succeed.

Unfortunately, by 1936 many families found themselves in a financial situation even more difficult than the one they had left behind, as a result of their ever-mounting debt. Limits on credit needed to be set to keep individual debt at a reasonable level, and the ARRC needed a way to direct money back towards the cooperative, and away from the private stores, bars and restaurants that had sprung up on the west side of the railroad tracks.

In 1936 the ARRC issued bingles as a solution to both of these problems. Except for the octagonal one-cent piece, denominations and sizes matched the official U.S. coins of the time, and they were minted by a Seattle company with experience making tokens for businesses in many part of the West.

It is a strange coincidence that the ARRC coins were labeled ‘bingles’. The popular Protestant minister for the colony was one Bert Bingle, and they are often said to have been named for him. “Bingle”, however, is also a common name for token money issued by companies in the West, as well as for poker chips. It is likely this was the origin of the name.

All colonists were given a fixed monthly allotment of bingles based on family size, which could be used at the Trading Post, the garage, the recreation hall, the hospital and other colony businesses. The tokens were made of brass [five and ten dollar amounts] or aluminum [one cent to one dollar amounts], and they functioned like real money, helping to control the spending.

They did not, however, keep money within the cooperative quite as planned. Private businesses sensed an opportunity and quickly accepted the tokens. Though some colonists had wage-earning jobs within the colony itself, most families were cash-poor; by accepting the tokens, private businesses were able to serve the greatest portion of the area’s population, who could not otherwise afford their products.

Bingles, also called scrip, were unpopular with the colonists, however. The pioneering spirit required to participate in the grand adventure of the Matanuska Colony was at odds with the bureaucracy that actually ran the project, and by 1936 many colonists were frustrated with the ARRC’s rules. Rather than the debt-reducer they were designed as, bingles came to be seen as one more way to increase the colonists’ indebtedness to the ARRC.

FROM USELESS TO COLLECTIBLE

Ultimately, Bingles were in use for only a few months during 1936, until they were replaced by a different credit system and debt reduction program. When they were stripped of their value, most of the larger denominations were turned in by the thousands for cash or applied back to family account with the ARRC. These[bingles] were subsequently forgotten in kegs in the ARRC’s attics.

The coins were rediscovered in the 1950s, and after the 20th anniversary of the Matanuska Colony they were offered for sale as souvenirs to raise money for local organizations. The fact that few actually sold proved bingles to be completely useless, as they were not even worth processing for the aluminum and brass of which they were made. The kegs were emptied off the Matanuska River Bridge, disappearing into the icy glacial water.

The few bingles that survive are mostly one- and five-cent coins, which were given to children or lost among household flotsam. Some complete sets exist, either purchased or given as gifts by city officials during the 1950s, or, more rarely, painstakingly assembled by coin collectors since their listing in the Red Book alongside other U.S. coinage.

The original dies were rediscovered in the warehouse of the Seattle company that originally minted the coins. Commemorative sets with a different reverse were minted from those dies for the colony’s 50th anniversary in 1985. Today, the rare original bingles [and even the anniversary sets] command collector’s prices.**

**c. “Bingles: the Official Currency of the Matanuska Colony”, written by Kara Cox, and provided by the Palmer Historical Society, which in itself was extracted from “History of the ARRC Bingles,” by Jim Fox 2010 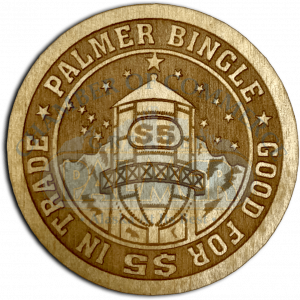 Today, the bustling town of Palmer resides upon the foundations of the Matanuska Colony, and though we do not face the same economic crisis of the early 20th century, modern times have yielded their own economic struggles. The Greater Palmer Chamber of Commerce chose to adapt the bingle experiment to better suit the economy, and so revived the bingle in late 2020. In these times, they are not paid out as wages, but act as a Palmer-specific Gift Card, redeemable at an ever-increasing number of local businesses! Nor are they made of metals, they are a wooden token laser-engraved with a picturesque design, updated annually. In the first year of bingle revival, the GPCC was able to measure $30,000 spent locally, just in bingles!

They are sold in $20 and $5 denominations exclusively by the Greater Chamber of Commerce, either from the office or the online store [please note that shipping is unavailable, bingles are available for pickup only]. Bingles can also be earned as prizes in various GPCC events, including Shop Palmer [where the grand prize is $1000, Colony Days, and Colony Christmas! They make fantastic stocking stuffers for those tough-to-buy-for folks who love to support local!

And don't forget, you can spend your Bingles at these local participating businesses: